On Thursday, Sen. Manchin told Senate Majority Leader Schumer that he would not support a reconciliation bill that included climate spending or tax increases before the August recess, as he wanted to make a decision on those policies only after the July inflation figures and interest rates were available.

After bowing out of negotiations on President Biden’s ambitious Build Back Better proposal last December, negotiations between Leader Schumer and Sen. Manchin over the last several months have centered around Sen. Manchin’s priorities for a narrow reconciliation bill: climate and energy spending, tax increases, prescription drug reform, and deficit reduction.

The House’s last day in session before recess is July 29 and the Senate’s is August 5, with both Chamber’s not scheduled to return until after Labor Day.

The Federal Reserve’s rate-setting Federal Open Market Committee next meets again to determine the federal funds rate on July 25-26. At that meeting, the Committee is expected to raise interest rates by 75 basis points to a range of 2.25 to 2.5%, matching last month’s rate hike, the largest one-month increase since 1994.

While Schumer was pushing for an agreement by the end of July so that Congress could pass a reconciliation bill before August recess, Sen. Manchin saw September 30 as the deadline for reconciliation negotiations, since that is when the reconciliation instructions expire.

Waiting until September would be a risk for Democrats in that Sen. Manchin’s vote for a somewhat larger package would be no guarantee, and raising taxes even closer to the midterm elections would make some competitive-seat Democrats anxious.

Sen. Manchin told Leader Schumer that if Schumer chose to pass a reconciliation by the August recess, Manchin would support a narrow reconciliation bill on deficit reduction and two health policies: lowering the price on prescription drugs and extending, for two years, enhanced ACA subsidies that were expanded through the American Rescue Plan Act last year.

Allowing Medicare to negotiate with pharmaceutical companies could save about $288 billion over ten years. Extending the ACA subsidies for two years would cost about $40 billion, leaving nearly $250 billion for deficit reduction.

Leader Schumer plans to pass the reconciliation bill, including the extension of ACA enhanced subsidies, by the August recess since many states set health care premiums in mid-August and Democrats want to avert such premium increases for roughly 13 million Americans, particularly so close to the midterm elections.

However, a two-year extension would raise the prospect of premium increases just prior to the 2024 presidential election. Sen. Manchin’s endorsement of a two-year extension of the tax credits is contrary to his previous position that he would only support policies that spanned the 10-year budget window.

President Biden released a statement on Friday endorsing the narrow healthcare-focused reconciliation package. He noted it would lower inflation and called on the Senate to pass the bill by the August recess. Senate Democrats plan to move forward on the reconciliation bill next week, with the item being top of the agenda at their private lunch on Tuesday. The bill can be passed with 51 votes in the Senate, including Vice President Harris’ tie-breaking vote, though there is still the risk that Democratic infighting could sink the package.

House Appropriations Chair DeLauro (D-CT) said the House plans to pass all twelve FY 23 bills prior to the August recess. The House passed all of its bills out of Subcommittee and Full Committee last month.

Next week the House will take up a six-bill minibus, H.R. 8294, which includes the following bills: Transportation-HUD, Agriculture, Energy-Water, Financial Services, Interior-Environment, and Military Construction-VA.

The second minibus will contain the remaining six bills, including the Labor-HHS bill, and is expected on the House floor the week of July 25.

Senate Appropriations Chair Leahy (D-VT) is not planning to markup FY 23 appropriations bills and instead will post the bills on the committee website at the end of this month, likely July 28. The Senate bills can then be used in negotiations with Republicans once a topline spending agreement has been reached.

Senate Vice Chair Shelby (R-AL) reiterated that before appropriators begin a conversation on topline funding levels they will need to agree on a framework. Absent an agreement on a framework and topline, a Continuing Resolution will need to be passed by September 30.

Sen. Leahy is recovering from hip replacement surgery he undertook after falling at his home several weeks ago. 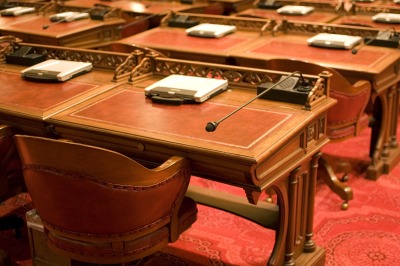 Senate Majority Leader Schumer stated he expects a procedural vote as early as Tuesday on a narrower competitiveness bill, which would include $52 billion in funding for semiconductor-chip manufacturing. The bill’s conference committee, made up of 107 House-Senate conferees, has yet to reach agreement despite over two months of formal negotiations.

Which proposals, in addition to the $52 billion for semiconductor-chip subsidies and tax breaks, make it into the final bill are still being negotiated, though workforce and trade provisions are unlikely to be included, and Leader Schumer left the door open to other provisions if they are ready by Tuesday. Democratic conferees had been instructed by leadership last month to focus their efforts on the non-controversial provisions where they could find bipartisan agreement.

On June 30, Senate Minority Leader McConnell (R-KY) tweeted that there would be no bipartisan competitiveness bill as long as Democrats were pursuing a partisan reconciliation bill. However, Sen. McConnell later said the House could pass the Senate bill or that Congress could simply pass the semiconductor-chips portion of the bill, yet when the White House expressed interest in this path key Republicans stated they wouldn’t support it so long as Democrats were pursuing their separate, unrelated reconciliation bill. It is unclear how the latest iteration of the reconciliation bill being pursued by Democrats, which drops efforts to raise taxes, will affect Sen. McConnell’s position on the competitiveness bill.

Senators attended a classified briefing on the competitiveness bill on Wednesday, in which White House officials outlined security concerns with waiting any longer to pass the bill. Democrats hope to have the bill passed by the August recess.

On Wednesday, Vice President Harris held an economic summit with Secretary Walsh focused on workforce-related investments in the American Rescue Plan. While the ARP only provided $365 million in direct investments to the workforce system, the summit focused on $40 billion allocated more broadly to workforce-related programming in the education, child care, and public health workforces, as well as $9 billion utilized by state and local relief funds allotted to workforce development. Please find the White House’s fact sheet on workforce investments here, which fall within the following categories:

• $2 billion to the CDC for public health departments

• $9 billion to HHS for home and community-based workers compensation

• $7 billion to HHS to expand the public health workforce

• $5 billion to postsecondary ed for students’ persistence and success