On Wednesday, the House passed a roughly $405 billion six-bill package on a party-line 220-207 vote. The package included the Transportation-HUD, Agriculture, Energy-Water, Financial Services, Interior-Environment, and Military Construction-VA bills. Over 600 amendments were filed, and over 190 amendments were considered in several batches, with many of them being approved. The bills include over $6 billion in Community Project Funding (earmarks).

All Republicans opposed the package, which was passed although negotiations on a topline spending agreement have stalled, largely due to the overall spending levels and concerns regarding inflation, in addition to objections to various policy decisions. House Labor-HHS Subcommittee Ranking Member Tom Cole (R-OK) noted the six bills would receive a total increase of 11 percent over FY 22 enacted, compared to the roughly 4 percent proposed in the House Defense bill. While the House bills will not become law, they will play an important role in negotiations between the House and Senate.

While House Appropriations Chair Rosa DeLauro (D-CT) had hoped to pass all twelve FY 23 bills prior to August, and the remaining six bills had been expected to be considered on the House floor this coming week, there is uncertainty regarding the remaining funding bills due to questions of Democratic support. Instead of considering all remaining six bills this coming week, Majority Leader Steny Hoyer (D-MD) discussed considering just three—the State Foreign Operations, Commerce-Justice-Science, and Labor-HHS bills.

Rep. David Price (D-NC) said that lawmakers were most focused on getting the Labor-HHS bills and State-Foreign Operations bills to the floor. The Labor-HHS bill is proving challenging for Democrats due in part to opposition to an amendment that was adopted in full committee that would prohibits ending the Administration’s Title 42 immigration policy until 60 days after the end of the public health emergency. Democrats are working with a narrow margin, as they can lost no more than four Democratic votes to pass bills without Republican support.

It is unclear if any spending bills will be on the House floor before recess, and no funding bills appear on the Rules Committee docket for this coming week. Majority Leader Hoyer said he believes after the election would be the best time to consider the Legislative Branch bill. Speaker Nancy Pelosi (D-CA) said on Thursday that whether the House takes up any funding bills depends on timing for the competitiveness bill and developments on reconciliation.

Senate Appropriations Chair Patrick Leahy (D-VT) plans to introduce the Senate FY 23 funding bills by the end of the month and not hold markups on the bills, barring a breakthrough in negotiations with Republicans. A bipartisan agreement on topline spending is not expected until after the elections. 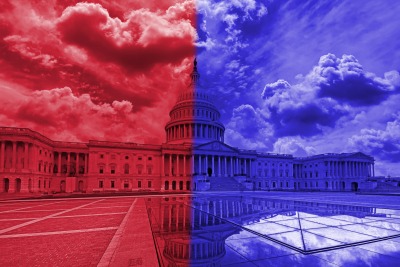 While Democrats are expressing confidence that their provisions meet the standards, there is some speculation that the parliamentarian could rule that one piece of the bill does not adhere to the reconciliation standards, the provision on penalties for pharmaceutical companies that raise prices faster than inflation for individuals on private insurance.

The Senate could see floor action on the reconciliation bill the first week of August. The measure would bring about a “vote-a-rama” in which Senators can offer an unlimited amount of amendments.

House Majority Leader Hoyer said the House may have to come back early from their scheduled recess, returning the last two weeks of August, to pass the reconciliation bill. Timing is off the essence as many state will begin to announce health care premiums soon.

On Tuesday, the Senate voted 64-34 to proceed on the competitiveness bill. Sixteen Republicans voted for the procedural motion and Sen. Bernie Sanders (D-VT) was the sole Democratic “no” vote. Majority Leaders Schumer (D-NY) had asked Sen. Todd Young (R-IN) for help in finding at least 15 Republican votes for the test vote, which was crucial in that the Republican support led Schumer to expand the package from a 73 page draft to a 1,000-plus page substitute amendment that included numerous other science related measures.

The bill includes $54.2 billion in mandatory appropriations over five years, including $39 billion in financial assistance for semiconductors and $11 billion for Department of Commerce research and development and workforce development programs. The bill includes $10 billion in authorized funding for regional technical and innovation hubs and $1 billion in authorized funding for a Recompete Pilot Program to support persistently distressed communities with economic development activities. The bill also includes funding authorizations for NSF, the Energy Department Office of Science, and more.

The Senate bill is expected to be considered on the Senate floor this coming week, with bill passage perhaps as early as Tuesday or Wednesday. The House could also consider the measure as soon as this coming week.

While numerous trade, workforce, and education provisions from mostly the House America Competes bill, but also the Senate USICA bill, were left out of the Senate bill currently being considered, Majority Leader Schumer has said the conference committee will continue its work and a package could still be considered after the August recess.

For SCSEP, there is $450 for SCSEP for FY23 in the House Labor-Health & Human Services Appropriations bill. Hopefully, there will be floor action on the bill this week.  In the Senate, the Senate Appropriations Committee is expected to release its FY23 Labor-Health & Human Services (HHS) bill this week, and we hope to learn the Senate’s SCSEP FY23 funding recommendation at that time. However, the Senate Labor and HHS bill, is not expected to move forward.